As reported earlier, Kralizec is busy with porting existing games to Franky. Kralizec also started with making code to support MSX compatible screen mode2 on Franky. We asked Armando (main coder) if it would be possible to share his code with the rest of us. Luckely Armando agreed.

His code detects if Franky is present and does all the initializations to ready the Franky screen mode (MSX screen 2 compatible mode).  Also included is the compiled rom file. You need a tool like loadrom for MSX-DOS to load the 32kb rom. The rom first detects if Franky is present, initialize Franky and then shows a snapshot of Arkanoid on Franky and at the same time shows a color rotation on MSX (on the Franky VDP interrupt). Feel free to download, study and use for your existing or new productions. Thank you Armando!

To execute the example rom you need a tool like loadrom which can be downloaded here:

Link to loadrom (lzh file, can be unpacked with Winrar under Windows)

For your convenience we also put the Sega loader tool online:

We attended the 36th users meeting of AAMSX in Barcelona.

AAMSX kindly provided a stand and a couple of monitors for us so that we could show our Franky cartridge with the latest converted software. Luckily we managed to assemble our first batch of Franky cardridges on time for the meeting. And, to our surprise, all Franky cartridges we brought with us were sold! We even got to take pre-orders (we do our best to send these to you in the coming days). 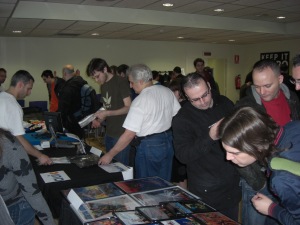 Our participation resulted in given support from the following Spanish developers: Relevo Software, Nerlaska Studios, Z80ST Software and Kralizec. Z80ST software ported their new game Qbiqs live at the meeting to Franky, which is of course quite an achievement.

Kralizec will adapt  one of their great productions to Mode4 on Franky, great news indeed. The other developers will port existing code or -hopefully- build in support for Franky in their new productions.  All in all the MSX meeting was vibrant and crowded. Refreshing! 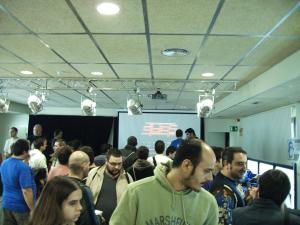 Also, we had a late dinner afterwards (and with late I mean very late 😉 with most of the active meeting crew and active Spanish developers. We really had a great time.  Our hosts took care of everything, even the massive bill afterwards. A big thank you for that! We owe you ;-).

We hope to be there next time. Barcelona is always a great place to stay. Also on Sundays. See below..

We even managed to get two Sega Master System consoles (pretty wrecked on the outside) on a flea market. They will probably get a new life soon…