You know these questions that start with “What if?”. Here at SuperSoniqs it is all about making our own “What if’s” possible. One of those was of course the lack of stereo sound in any MSX.  A while ago we stumbled upon an AY8930 sound processor. It was designed by General Instruments as an successor of the AY-3-8910 and sold to Microchip Taiwan together with their other chip designs. Microchip actually released it, implementations were made for PC (the infamous Sound Master) and the design was also used in a few arcade systems. The fun thing about the AY8930 is that it has two different operating modes, one is AY-3-8910 compatible, and the other one is the enhanced mode. The enhanced mode of the AY8930 adds separate envelopes for the three channels (as opposed to one shared envelope in the AY-3-8910), variable duty-cycles, more bits of precision for note frequency, volume, and envelope frequency, and a much better configurable noise generator. 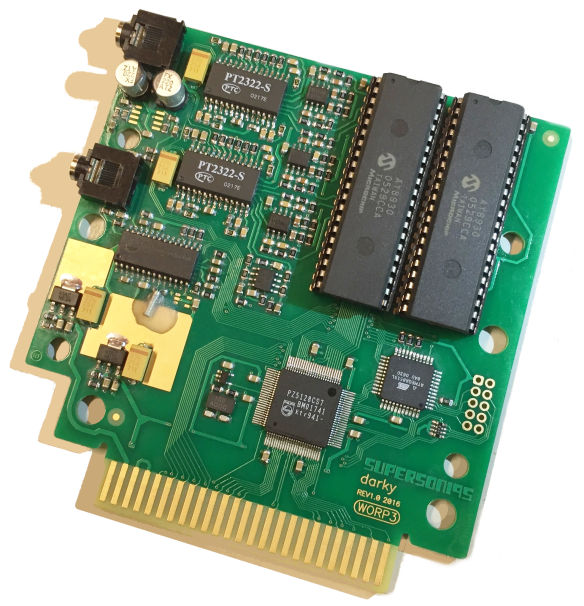 But of course the main fact that it was backwards compatible with our MSX PSG made us thinking why not release a cartridge with this soundchip? And why not a cartridge with two new ePSG’s? Since these chips have separate outputs for each PSG-channel (even our MSX PSG has, but few MSX’s actually make use of this), we thought it would be nice to put each channel into a stereo mixer, so that each seperate channel can be mixed and placed into the stereo dept field (stereo panning). Also, the channel mixers used have some more functionality like treble, bass, equalizing and 3d stereo spatializing.

But that’s not all. The audio end result of the mixed channels is fed into a SPIN FX-1 Effect processor, which has fixed effects such as echo, reverb, flange, chorus, etc. and 8 programmable effects. For this a EEprom is also part of the PCB design.

In default mode our new cartridge will start in the MSX PSG compatible mode, with the second PSG on a different clockspeed to create a pseudo stereo effect, usable with all existing MSX software. Registers are being made to access all PSG’s in MSX or ePSG enhanced mode, and to control the mixers and effect processor. An Atmel processor and Philips CLPD are used to control all hardware on this PCB.

The ePSG stereo card has two stereo mini-jack outputs, one line-out and the other one is an amplified headphone output.

Programming and testing this pcb will take some time. We hope to be able to release this card later this year.

Due to populair demand we hereby publish the .stl files of the Franky cartridge enclosure too. Some people had problems converting the Sketch-up files. With these .STL files you can 3d-print a compatible casing for your Franky project. Most professional 3d printer companies also accept these .stl files. Have fun with it.